SAVAGE TRAP QUEEN OPEN UP TO BBC INTERVIEW, THAT SHE MAKE UP TO 80K TO 100K PER BLUE FILM SHE ACT. 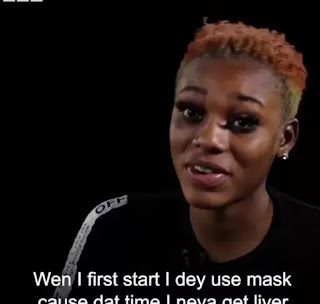 Savage Trap Queen has shared some great things about being in the blue film business. The actress opened up in a recent interview about her life as an entertainer in such capacity.
Speaking to BBC interview, Savage revealed that she makes up to  N80,000 to N100,000 per movie  she act. Savage says some story  about her relationship with her mother and she said that no matter what she is a pornstar,a girl that show the world her n&kedness, but her mum still loves her the way she is.
However acting blue film has not been all rosy for the actress who revealed she first started by wearing masks but later showed her face. She also said that she was a former beauty queen but had her crown stripped when she decided to become an adult entertainer.