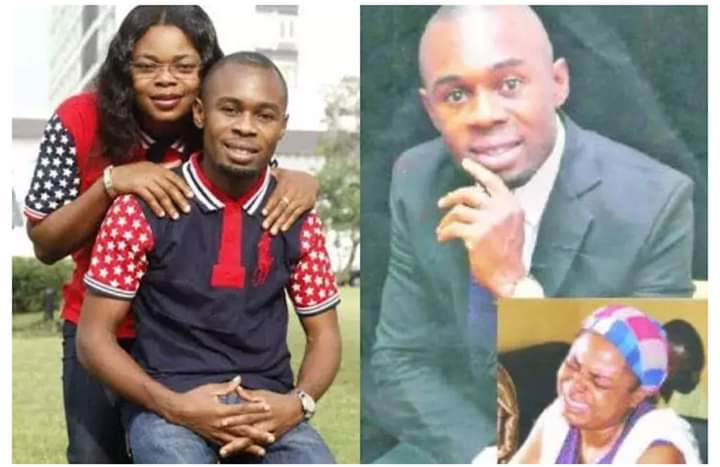 Pascal Chukwuemeka Nnorom, a staff of Union Bank of Nigeria, has been killed by one Joseph Udoh, Sun reports.

Pascal and his wife of 2 years, Priscilla, were on their way to attend the wedding ceremony of Pascal’s colleague in Elelewon area of Port Harcourt, Rivers State.

Pascal’s journey to his untimely grave began when a Toyota Camry car, driven by one Joseph Udoh, from Anang in Akwa Ibom State, hit his Honda CRV SUV in Oil Mill area of the city, near the Eleme bridge. .

The deceased, who hailed from Eziudo Mbaise, Imo State, was said to have alighted from his vehicle and walked over to meet the driver of the Camry. He placed his hand on the door of the Camry, but Udoh allegedly refused to alight from his own car for them to resolve the matter.

Rather, he quickly wound up the glass, trapping Pascal’s hand and then sped off. In a chat with Sun, grieving Priscilla said: “He dragged him several poles before he stopped.” .

In the process of draging the victim, his body hit the hard pavement severally. His spinal cord and legs were broken and he became immediately unconscious and later died.

A mob prevent Udoh from escaping. They tortured him and were about to give him jungle justice before he was rescued by policemen. Priscilla described the husband as her best friend. “He was everything to me,” she added, sobbing profusely. .

According to the widow, one of the most painful aspects of the death was that her marriage to Pascal was yet to produce a child before his death. “When the mob was beating Udoh, he told them he was ready to die, as far as he had done what he wanted to do,” Priscilla said.

It was gathered that soon after her husband was confirmed dead, Priscilla fainted and had to be revived. Meanwhile, she has appealed to the government and the security agencies to bring her husband’s killer to book. “I want justice,” she said, wailing.