CHIMAMANDA CRY WITH TEARS OVER BLACK LIVES MATTERS IN LONDON,(VIDEO). 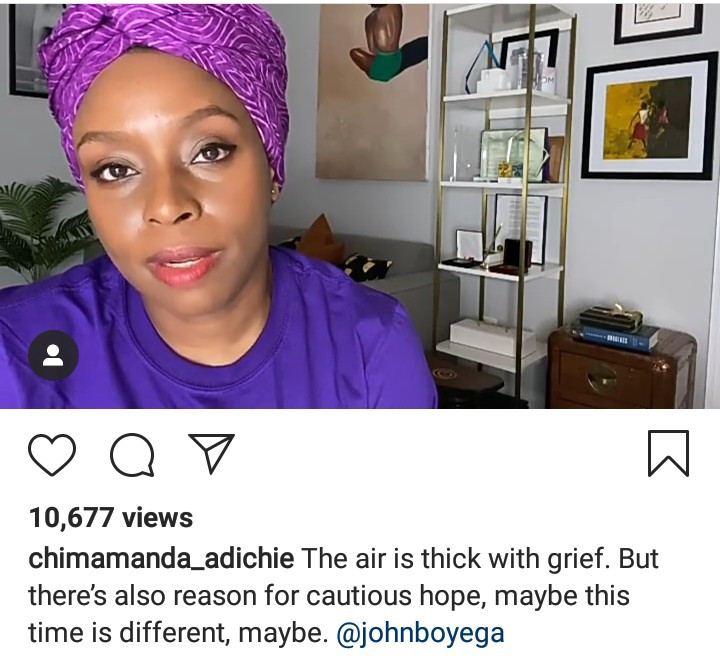 From the news the Hollywood actor known as John Boyega broke down in tears as he condemned racism at the blacks lives matter protect in London.

He said he doesn't know if he going to have a career after this, and chimamanda show up on her Instagram page and offered some words of advice to Boyega in a video she shared.

Other Instagram video post she wrote,"The air is thick with grief, but there's also  reason for cautious hope. Maybe this time is different maybe.

From her video record she said,"Watching john boyega speak at the protest im Hyde park it brokes my heart, made me cry. I'm sending love to you john, i hope that you're surrounded by love because i think that what you're doing is necessary amd very important.

But also comes at a cost emotionally, so I'm sending you all my love and admiration ad pride. So many young black people out there who have dealt with so much crap over time and they're out there and they're doing their things and it's so adorable to see them taking up space.

The incident happened on Wednesday as actor john Boyega beat known for his performance in the star Wars sequel trilogy protested in London in response to the death of African-American George Floyd.