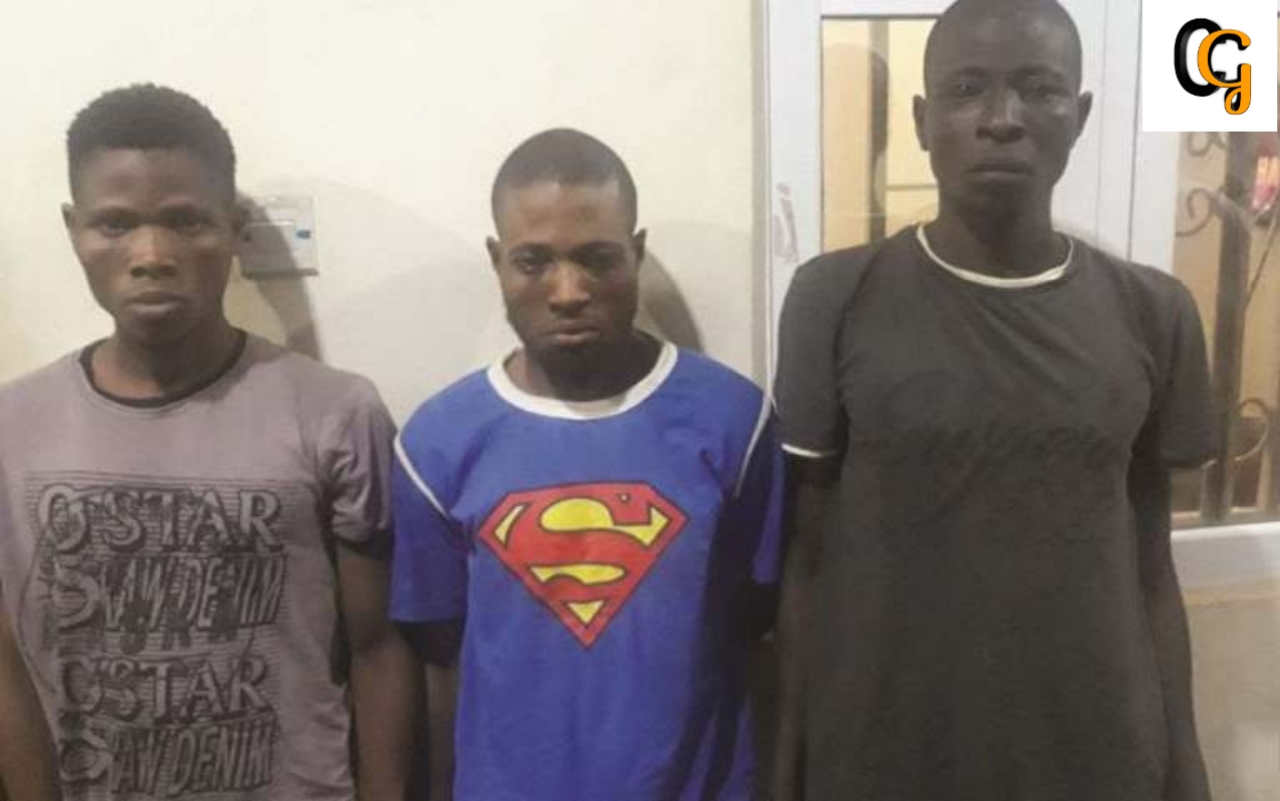 The operative of the Nigerain police Force Intelligence Response Team has arrested brothers(Akinola Akeem and Muyiwa Akeem) and their native doctor, Odunta Moses for robbing their Grandpa N550,000.

According to the news, the brother who was suspected as Notorious robbery gang that has been terroizing ijebu Mushin area of Ogun state for a long time, they were arrested after they attacked the home of Pa Olutokunbo, in Ikala Village of Ijebu Mushin, killing his 72 year old wife identified as Christiana Olutokunbo and robbed him of sum of N550,000 and three phones.

Through the investigation which was carried out after one of Pa Olutokunbo's sons who is based in the United Kingdom petitioned the inspector General of police, Adamu Mohammed led to the arrest of one of the users of the stolen mobile phone.

He confessed during the investigations After the stolen phone user inform police, he said that he carried out some operations within ijebu Mushin area of Ogun state including the robbery in Pa Olutokunbo house and the killing of his 72 years old wife.

He ordered the security operatives to arrest his younger brother, Muyiwa who took part in the operation and their native doctor Oduntan Moses, who prepared charms for them,

I have gone on three robbery operations and i killed a woman in my last operation, i and my younger brother formed gang because we were frustrated,  in my first operation, i made N5,000 and second operations i made N9,000, the third operation was at ikala where we killed the old woman.

Before going for that robbery first went to Koba a powerful native doctor in my community to prepare charms for me and my brother, we got information about Pa Olutokunbe because he talked carelessly. He was in a bar and was talking about the money he had in his bouse which my brother overhead.

Then went and consulted a native doctor to perpare charms for us to make us succeed in the operation, we asked Koba to check if the man had the money in his house and he said yes.

We asked his to give us charms that would enable us to appear inside the man's house, he prepared it and gave us to wear it on our necks but when got there the charm failed to work and when we called him on the phone told as to be patient that someone would come out of the house.

We saw someone coming out of the house and when he was going back, we followed him into the house. We met four person in the house but there was this old woman we met who started shouting and i took her into the room but she died while i was pulling her.

My brother Akeem asked the man for the money in his house and the man gave us N15,000, we called koba again and told  him that the money was not in the house but koba asked us to keep searching because he was very sure that there was money in that house as his oracle never deceived him.

When my brother held the man and tried to kill him, the man begged and went into his room and brought out a bag containing money and gave it to us.

We saw charms on the money and we called koba and informed him about the money the charm and he asked us not to bring it to him immediately, we took the bag to him and he gave me N60, 000 and gave my brother N50,000.

But koba told my brother and i that he could prepare rituals for us that would make us rich and he had asked us to get N100, 000 for it, but since we were so poor and we couldn't raise the money, we decided to give him the N100,000 from the money he gave us.

Then, he prepared a soap for us which he ask both of us to bath with, but after all we did, we didn't get anything, we then realised that koba fooled us. My brother and i were looking for a way of fighting him to get back our money before we were arrested by police.